Who gave the Ultimate Sacrifice in April”

The Colonel C. W. Woodson Memorial Gallery located in the Virginia State Police Academy is dedicated to those members of the Virginia State Police and their predecessors, the inspectors of the Division of Motor Vehicles, who gave their lives in the preservation of law and order, and who, in so doing, lived and died in the best traditions of law enforcement's duty and service to mankind.  The Woodson Memorial Gallery proudly displays the portraits of three Virginia Troopers who lived their lives by this tradition and by the Trooper's Pledge down to the very letter and who in the month of April gave the Ultimate Sacrifice protecting and serving the citizens of our State and Country.

We will always remember and honor them for how they lived and served.

"It is not how these officers died that made them heroes, it is how they lived."
National Law Enforcement Officers Memorial, Washington, D.C.

Today and every day the Virginia State Police Family Remembers and Honors Trooper Leo Whitt, who 35 years ago, gave his life in the preservation of law and order, and who in so doing lived and died in the best traditions of law enforcement's duty and service to mankind.  We honor Trooper Whitt's life of service to his Community of Prince George County, the Commonwealth of Virginia, and the Nation.

Trooper Leo Whitt is remembered by Family and Friends in the article "Trooper Honored for Ultimate Sacrifice" following a ceremony dedicating the Johns Road/Route 667 Bridge as the Trooper Leo Whitt Memorial Bridge on July 19, 2014:  https://ashleylynnmcleod.com/trooper-honored-for-ultimate-sacrifice/

Trooper Whitt's life of service included serving his Nation in the U. S. Army and serving the people of Virginia as a Trooper with the Virginia State Police for over 20 years.  He was 48 years old.  He is survived by his wife, son, and daughter.

While Trooper Leo Whitt is missed every day, his memory lives and his life of public service stands always as an example for us all.

Today and always, the Virginia State Police Family Remembers and Honors Motor Assistance Aide Horace A. Jarratt's life of service to the Citizens of Virginia and to the Department of State Police. Motorist Assistance (MA) Jarratt lived and worked to serve and to help motorists who were experiencing problems while traveling through Virginia.

On the afternoon of April 25, 2007, Motorist Assistance Aide (MA) Jarratt had pulled off onto the right shoulder of the northbound lanes of I-95 to respond to a call for debris in the roadway.  Tragically, while attempting to remove a large piece of tire tread from the center lane, MA Jarratt was struck by an oncoming tractor-trailer and he died at the scene becoming the 55th member of the Virginia State Police to die in the line of duty.  He had served as a member of the Virginia State Police since January of 2005.

MA Jarratt is fondly remembered as a giving man who did all he could to help others.  He was well known for going out of his way to assist those who were experiencing problems on our roadways - giving freely of his time, of his considerable talent and often of his own money to pay for a meal or a hotel to help another person.  MA Jarratt was greatly admired and respected for his love of the job and for his love for his fellow man.

MA Jarratt's memory lives within the members of the Virginia State Police and his service to his fellow man serves as a model for us all to follow.

Thank you for your service and example Motorist Assistance Aide Horace A. Jarratt.

Today and every day the Virginia State Police Family Remembers and Honors the service and dedication of Investigator Claude Seymour who gave his life in the preservation of law and order, and who in so doing lived and died in the best traditions of law enforcement's duty and service to mankind.  Investigator Seymour’s life of service included serving and protecting the Citizens of Virginia as a Virginia Trooper and protecting the freedom of our Nation as a member of the military.  He was a veteran of World War II and the Korea Conflict.

Tragically on April 25, 1975, Investigator Seymour was involved in an on-duty automobile accident on Route 1 in Spotsylvania County.  He succumbed to his injuries as a result of this accident becoming the 31st Virginia State Police Trooper to give the ultimate sacrifice.

We honor his heroism and life of service today on the 45th anniversary of his death.  His memory lives and his life of service continues to inspire.  Thank you for your service and example.

Investigator Claude Everett Seymour is Remembered and Honored everyday by the following memorials: 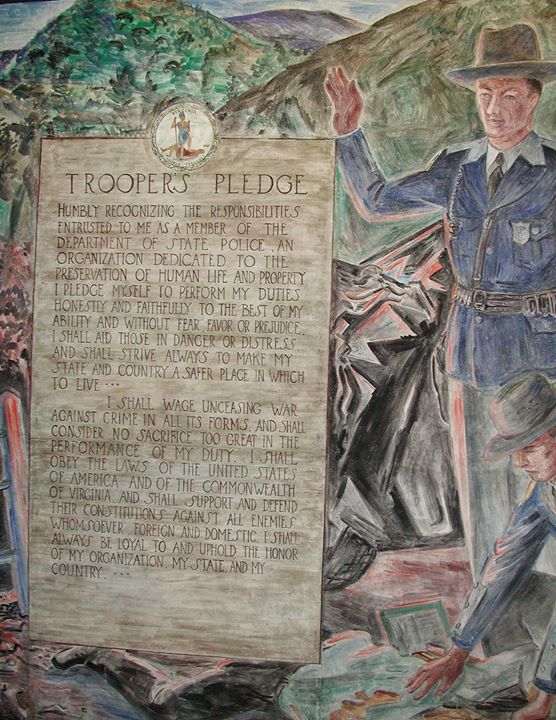 "Humbly recognizing the responsibilities
entrusted to me as a member of the Department of State Police,
an organization dedicated to the preservation of human life and property,
I pledge myself to perform my duties honestly and faithfully
to the best of my ability and without fear, favor or prejudice.

"I shall aid those in danger or distress,
and shall strive always to make my State and Country
a safer place in which to live.
I shall wage unceasing war against crime in all its forms,
and shall consider no sacrifice too great
in the performance of my duty.

I shall obey the laws of the United States of America
and of the Commonwealth of Virginia,
and shall support and defend their constitutions
against all enemies whomsoever, foreign and domestic.
I shall always be loyal to and uphold
the honor of my organization, my State and my Country."